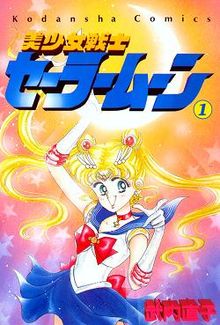 The Sailor Moon manga was written and illustrated by Naoko Takeuchi. The manga/anime features a young schoolgirl named Usagi Tsukino as she transforms into a feminine superhero to search for a princess and an artifact called the “Legendary Silver Crystal”.

Later in her journey, she encounters more Sailor Guardians to help in her battle against evil.

The anime, produced in Japan had many episodes/seasons and a following newer anime, called “Sailor Moon Crystal”.
Usagi, and her cat companions, Luna and Artemis help defeat evil with the other Sailor Scouts and Tuxedo Mask.