In this month I read a action packed graphic novel called Suicide Squad. Because the movie was coming in August. So in this book there were really good details about the characters. My most favorite character was Dead-Shot because, he was really chill and every times he shoots he never misses. And in this comic they also show some extra characters like the Reverse Flash. So this book is really good and I would recommend this to you. 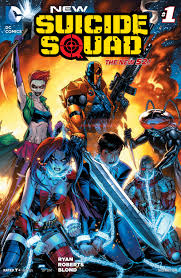